In  North East Wales already, across Flintshire and Wrexham, we have come up against a possible barrier to Public Engagement with Older People in residential settings.  Recent experiences have shown us that there is indeed a real demand for Digital Inclusion but that two main issues arise that make the task harder for the Digital Leaders.

1.A lack of ICT facilities that make delivery possible or productive.

2. A lack of understanding of older peoples needs at the levels needed to make decisions.

Indeed one official actually stated clearly that he could not see the need to put Skype on computers at all for older people.

Here is a famous Youtube video of a lovely couple getting to grips with technology. Although they struggle in this clip, its worth bearing in mind that they now have a YouTube channel of their own.

Absolutely not, but we do need to consider the best way to influence decision making and to alter what is a mindset amongst many ICT officers that sees them paranoid about inclusion, or unaware of the benefits.  So how do we achieve this?

In Wrexham and Flintshire we have funding from both Local Authorities but despite the fact that both are on board with our initiative, there remains a disconnect between decision makers in different corporate departments and ICT.

What we believe is the best way to influence important decisions is to demonstrate the benefits in stark reality. Promote the excellent work being done at the highest levels possible and make sure there is undeniable photgraphic and video evidence available.

The Get Online Wrexham Flintshire Team recently visited a residential centre in Flint and engaged with a small group of people one of which was Evelyn, aged 100.  After an introductory chat, Evelyn was soon looking at an IPAD and trying her hand at making music on one of the apps.

Whilst this was going on the team also engaged with her freinds and all, despite being of what many might consider quite senior age, were really interested in the technology.

Within 20 minutes of arriving, Evelyn was chatting to her niece in France via Skype - the very programme one officer thought was unsuitable for computers and older people.  This was not necessarily a remarkable achievement because to think of it as such could patronise older people. Evelyn was shown something that could be of use, and she used it. 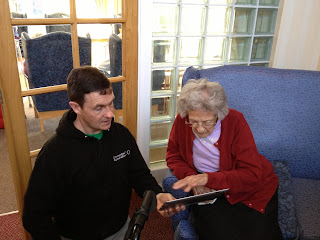 People renting council homes are able to set up computers and wireless broadband so why not people living in residential centres? Are they not afforded the same rights? Is it discriminatory to deny them access to the internet in whichever appropriate format they choose?

This is what we learned as a team on this visit. The value of choice and equal opportunity. It is one thing to say people are digitally excluded but quite another to consider they might be digitally discriminated against.  It must be made clear that this is almost certainly due to a lack of knowledge on the part of some ICT professionals rather than any deliberate attempt to deny access, so how do we change this?


This is Evelyn at 100 years young, so youre never too old!

Project X (aka gently get the message home)

The Get Online Wrexham Flintshire team will focus over the next two months on gathering multimedia evidence to be presented to Local Authority Officers and Councillors. We will set up meetings with community groups (an excellent way to engage councillors) and also internal departments at local authorities.  We will use hard evidence of ICT being used to engage with older people.  This evidence can be embedded in PREZI presentations or YOUTUBE clips - set up for the initiative.

To what end though?

By highlighting the success stories it puts us in a position where other residential centres will want to be a part of the process. By highlighting success we can surreptitiously bring issues to light and influence change. For the Initiatives in North Wales to be successful we need to influence the Local Authority ICT departments, to get them to find ways to work outside their steely and sometimes paranoid grip.